2nd Best Moment of My Life 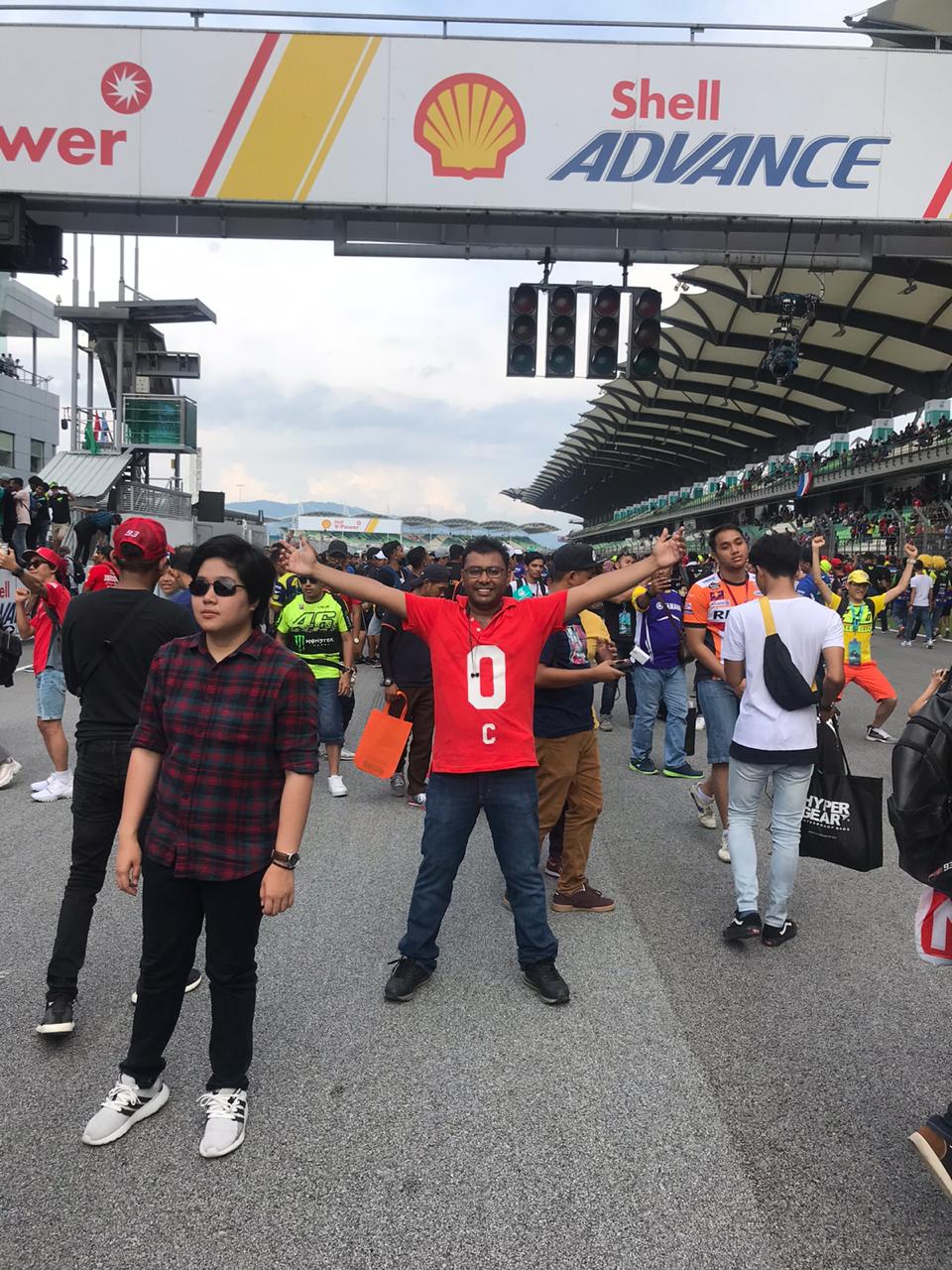 To this day the most memorable moment of my life happened way back in April of this year . After coming back in the country I made a small visit of my friends office to celebrate the 1 month annniversary of our F1 visit & out of nowhere bought tickets for the 2019 Malaysian MotoGP Grand Prix.

My journey with my friend Shawan started from Dhaka reroute to Langkawi and then to Kuala lumpur Malaysia. Sadly the track is some 55-60 km away from the Petronas tower. Due to our tight schedule we skipped the Friday practice session & were on right time for the Saturday FP3 session and qualifying.

Sepang International Circuit is a huge circuit. It was built for Formula 1 and sadly since F1 said bye bye to it back in 2014 it now only host MotoGP as its primary race. We were very lucky to sit on the upper deck on Saturday and we sat on different part of the track.

First we sat on the opposite of Marc Marques stand, then we also sat on the back straight from where I can totally see Turn 11 (where sadly Marco Simoncelli died during the MotoGP race in 2011). Saturday headline was conquered by Fabio Quartararo who grabbed pole as Marc Marques crashed out of the Q2 session.

On Sunday we were a bit late to arrive on the track due to the traffic as there were some 100,000 people who came to watch the MotoGP race that day. Also we had to come by a shuttle bus so our timing of coming on the track wasn’t right.

We saw the Moto3 race and also caught up with the Moto2 race. In Moto2 race I was lucky to see a great battle between Brad Binder & Alex Marquez (yes younger brother of Marc Marquez). By finishing 2nd Alex managed to take his Moto2 title, sadly he won’t have any seat in MotoGP next year but maybe there will be a seat available for him once some of the 2021 seats becomes vacant.

We were set for the MotoGP race come 3 PM local time, before that we saw the Gladiators coming out of the pit lane for the warm-up of their bikes and then they set out for the sighting laps.

When the lights went out for the MotoGP race the roam from the crowd was epic, the sound of those 22 bikes going through turn 1 was something to remember for a long time. Just after lap 1 Mavrick Vinales was leading the race while Marc Marquez made an awesome opening lap where he gained around 9 places.

Mavrick made no mistake since then & held his position, while poor Quantarao couldn’t capitalize on his pole position lap. Now come to the party piece, a certain 7 times MotoGP World Champion Valentino Rossi, whenever he tried to make a move against Andrea Dovizioso the whole track just erupts for him, cheering. Rossi is the reason why many people in my generation hooked up into MotoGP, just like Michael Schumacher is the reason why we got hooked up into Formula 1.

The 20 laps raced finished very soon than expected and after the race me & my friend ran on the race track to see the podium celebration. I nearly ran out of breath as I can’t remember when the last time I ran so hard in my life was. The sun set and we came back from the track bringing with us all the great memories of the race.

Outside the Grand Prix Venue you will always find stalls & pavilions of the MotoGP Sponsors and merchandize. Most of the time they give good amount of discount but as per as merchandize are concern, here it is very very expensive. The atmosphere of any race event is something awesome to cherish. Yes sitting in front of a television you will get to see more of the RACING but nothing beats the adrenaline rush of a Grand Prix Race track.

One thought on “2nd Best Moment of My Life”